Wallace Worsley made five films with silent movie icon Lon Chaney. Lamentably, two of those, Voices of the City(1921) and The Blind Bargain (1922), are lost. The Ace of Hearts (1921) survives, but their most famous collaborations remain The Penalty (1920) and the epic Hunchback of Notre Dame (1923).  It is for these two films Worsley, an otherwise undistinguished commission director, will be remembered, if at all.  The Penalty was Chaney’s first starring role, and the film justifiably made him a major star.

The plot of The Penalty is beautifully absurd, operatic, and addictive.  An injured young boy has been unnecessarily mutilated by a young Dr. Ferris (Charles Clary).  A seasoned colleague arrives and tells Dr. Ferris that amputating the boy’s legs was not at all necessary, but the veteran promises to remain silent about the malpractice.  The bed-ridden boy hears the conversation and tells his parents what has transpired.  However, the boy’s revelation is dismissed as delirium cause by a contusion. 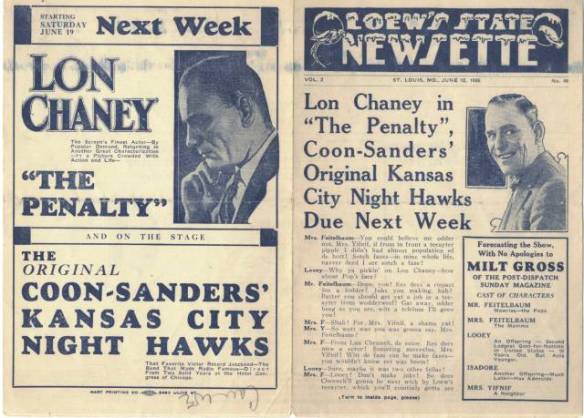 Twenty seven years later, the boy has become Frisco’s criminal master-mind, nicknamed the Blizzard.  Chaney’s performance as the Blizzard is a tour-de-force that was achieved through a painful pulleys, belts, leather stumps, and a harness which strapped his legs behind him.  Because of the extreme contortion and discomfort to the actor, Chaney’s scenes were filmed in short takes.  His performance is amazing.  He swings, pulls, and climbs with such robust, Tex Avery-like vigor that the illusion is feverishly complete.  Only Douglas Fairbanks could exude as much screen energy, but while Fairbanks grinned his way through elaborate stunts, Chaney invited you to see him sweat and even laugh with him through his pain.

The Blizzard runs a complex syndicate which local law enforcement cannot penetrate.  Desperate, officials send an undercover agent, Rose (Ethel Gray Terry) into Chaney’s lair.  The criminal is abusive, misogynist, seedy, and initially lacking in sympathy.  There is a dark, latent sexual undercurrent between the Blizzard and Rose.  Only music calms the Blizzard, and Rose serves as his feet, pushing the pedals of his piano while he plays.

The Blizzard is part Ahab and part Dr. Mabuse, plotting an elaborate (and far-fetched) revenge against the entire city (which involves utilizing the straw man communist menace.  The fifties was not the first Red Scare era, and Worsley’s earlier Ace of Hearts projected a similar paranoia).  Among others, his vast net of revenge seeks to catch the doctor who maimed him.  The Blizzard is also part Milton’s Lucifer who, after the fall, rises to become Master of Hell.  Chaney literally becomes Satan when he answers an ad to model as the Prince of Darkness, for Dr. Ferris’ sculptor daughter Barbara (Claire Adams).  Chaney’s malicious charm bleeds through when he offers to pose “if there’s enough of me.”

The Blizzard intends to blackmail Ferris into mutilating Barbara’s fiancee, Dr. Allen (Kenneth Harlan). He lusts after Allen’s legs and wants them for himself.  It would be horrific, except that Allen is so suburban, so unimaginative, so insensitive, so belittling of his fiancee’s artistic ambitions, and so downright annoying that you almost find yourself rooting for the Blizzard’s plan to succeed.

A hackneyed conversion mars the last act of The Penalty, and the film descends into pedestrian moralizing.  Tod Browning would have allowed the misfit villain’s crimes to go unpunished in a far more guilty, callous, and affluent society.  There is also some unintentionally hilarious inter-titles and unintentional surrealism which, here, simply doesn’t work.  In the right hands, The Penalty could have been one of the silent screen masterpieces, but Worsely’s direction fails to rise above the script.

An even more vivid example of Worsley’s flat-footed direction is in their collaboration, The Hunchback of Notre Dame(1923) which propelled Chaney into superstardom. Seen today, especially in light of the vastly superior 1939 remake (directed by William Dieterle and starring Charles Laughton), the silent version of the Victor Hugo classic falls far short of its potential.  If Worsley was out of his element in small, dark territory, he was even more out of his element in epically budgeted, dark literary territory.  In both The Penalty and The Hunchback of Notre Dame, Chaney secures his credentials as an auteur actor, trumping the director and scripts.  Both films are essential silent cinema, but they wouldn’t register at all without the Man Of A Thousand Faces.