The “SlapHappy Volume 8 Collection: Surreal Comedy” must be unreservedly recommended for making available  rare, hidden fragments from surreal cinema’s infancy.  It’s not everyday one gets to see J. Stewart Blackton’s 1908Thieving Hand which pre-dates the later, similar theme of a wayward, disembodied hand  found in films like The Beast with Five Fingers (which Buñuel worked on during his brief Hollywood stint). 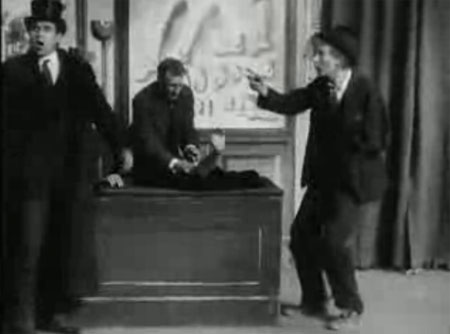 Edwin S. Porter collections aren’t  exactly a dime a dozen either, so 1906′s Melies inspired Dream of a Rarebit Fiend,based off the famous Windsor McCay comic strip, is possibly the highlight here.  The sight of something akin to Linda Blaire’s bed engaged in a Dickens-like flight across a city skyscape is well worth the price.  Today, Fiend is possibly the most interesting of Porter’s vast but not entirely distinguishable output, certainly  much more so than some of the historically better known films, such as  Life of an American Fireman.

Still, despite the glimpses of rare treasures here, SlapHappy Volume 8 falls short of being the ideal collection.  These are indeed mere glimpses, clips culled from the films, and since most of these are shorts, presenting these films in their entirety could have been easily accomplished and would have been much more desirable.

The SlapHappy producers, in following the formulaic recipe of their series, short-changed the potential of what could have been their most valuable volume.

Stills from films like Keaton’s The Playhouse are utilized, but there no actual clips. Instead, excerpts from lesser, more obvious, on the surface examples of Keaton’s ventures into surrealism are shown (Buster running into dangling skeletons, etc) simply because these are more obvious; a bit like Salvador Dali being held up as the quintessential persona over considerably more substantial surrealists such as Max Ernst and Paul Klee.

The producers’ goal, as Sam Charles’  narration indicates, is focused on early surreal comedy–as opposed to early surrealism–but even here, it falls short of being the reference volume.  An extraordinary amount of time is given to the weaker Fresh Lobster, when much more time could have been devoted to Zecca’s far more compelling Slippery Jim(Zecca was an editor for Melies, and it shows), the films of Charley Bowers, or numerous, much more substantial examples of early surreal comedy (Chaplin’s surreal heavenly dream sequence from The Kid, Keaton’s The Navigator, The Frozen North, Sherlock Jr, or Beckett’s  Film are just a few, better known examples).

Surreal Comedy is an all too brief entry, abbreviated to make room for the Getting the Girl and Chaplin bonuses, both of which contain footage found elsewhere. Still, Volume 8 is a valuable but unimaginative introduction to the art of early surreal comedy that ultimately falls short of being the priceless collection it could have been.