Long Pants is the film in which that annoying breed known as “slapstick lovers” start their bitching crusade against the “weird” Harry Langdon. Long Pants is also the film that the collaboration between Langdon and Frank Capra came to a crashing halt, due to aesthetic differences which involved the development of Langdon’s character. Langdon and writer Arthur Ripley wanted to take the character into darker territory. Capra vehemently objected and was fired by Langdon, with Langdon anonymously finishing up directorial duties.

Slapstick, as an art form, dates badly and frequently induces more groans than laughs today.Chaplin‘s more ambitious efforts, with (balanced) pathos and dramatic story, telling are of far more interest than his earlier straight-up slapstick efforts for Sennett. Keaton‘s inventiveness and occasional forays into surrealism hold up as his best work and can, up to a point, prove fuel for those arguing for his superiority. Seen today, Langdon was right in his endeavor to make his on-screen characterization darker, more idiosyncratic, more unique, even if naive critics whine that Langdon simply “ceased to be funny” and just “got weird.” It is Langdon’s weirdness that set him apart from the beginning and, while I would probably not, overall, place him in the ranks of a Chaplin or Keaton, I would argue that Langdon etched an influential persona that secures his position as one of the great silent clowns and defies the “forgotten” label often attached to him. 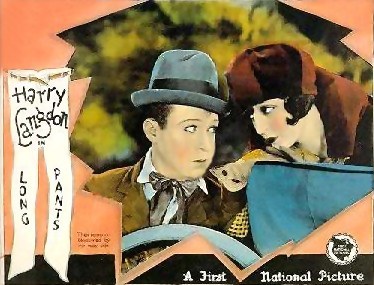 Contemporary audiences, unable to relate to 1927 mores and customs, will certainly find the initial premise of Long Pants unintentionally bizarre in itself. Harry’s father (Alan Roscoe) feels it is time for his boy to grow up and buys him his first pair of long pants, initiating Harry into manhood. Harry’s mother (Gladys Brockwell) is very weepy eyed over the prospect, feeling her little Harry is far too young for long pants and wearing them will only bring trouble. She is correct, as Harry is, psychologically, still a boy. Once Harry loses his short pants (and stockings—an amusingly ‘creepy’ image) and then dons his long pants, he spies a beautiful, exotic woman in a broken down car outside. Mother’s predicted “big trouble” begins its course.

Actually, this is a bad boy habit already formed in Harry, even before his initiation into long pants status, which mama must have sensed. In the opening scene, Harry is lustfully looking at girls from his attic window.

Harry jumps on his bicycle to get a closer look at this woman in the car, who is in fact the wanted criminal Bebe Blair (Alma Bennett). Bebe is temporarily stranded due to a flat tire. Her chauffeur is fixing the problem when Harry arrives. Unknown to Harry, Bebe is smuggling nose powder for her criminal boyfriend. Harry wheels around Bebe’s car, showing off his newly acquired long pants along with his considerable bike riding skills. Bebe is equally annoyed and amused by this man-child stranger. She gives Harry a kiss in an effort to get rid of him, but, of course, Bebe’s wet lips have the opposite effect on poor Harry. Bebe vamps him and he is now convinced that he must marry Bebe. 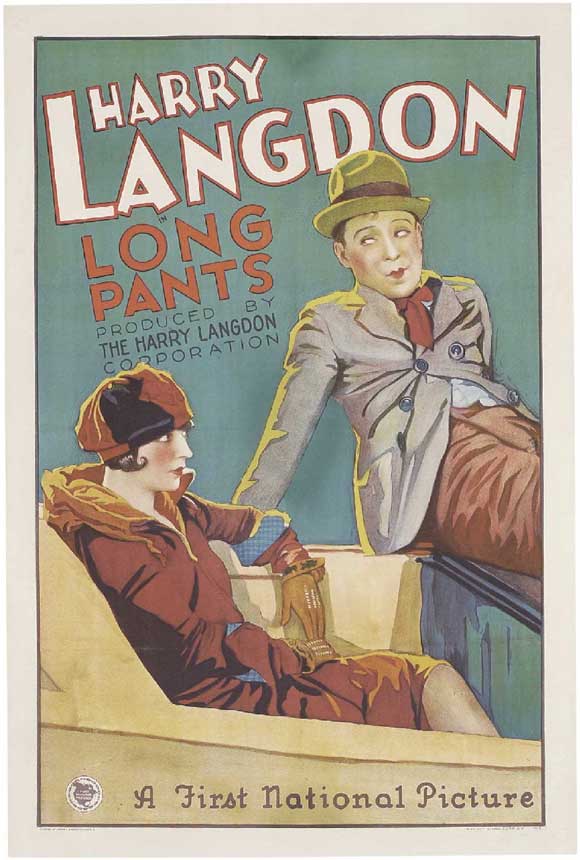 Harry’s mother and father have different plans. They want Harry to marry Priscilla (Priscilla Bonner, who starred with Langdon in Capra’s popular Strong Man from the previous year). Indeed, Priscilla is the type of gal to bring home to mama; the only problem is, compared to Bebe, Priscilla seems to be a bit dull. Priscilla and Harry’s parents are insistent on the wedding taking place despite Harry’s new-found infatuation for Bebe. When Harry finds out that his “true love” Bebe has been caught and imprisoned, Harry decides the only thing left to do is kill Priscilla. Here, Langdon foreshadows dark hued man-child types such as Steve Martin (when he counted) and Pee Wee Herman (Stan Laurel, often compared to Langdon, was simply a neutered version). Watching little Harry fantasize about murdering his bride in the woods on their wedding day can be as disconcerting as amorous little boy Pee Wee looking up girls’ skirts with a mirror tied to his shoe.

It is the contrasted imagery and characterization that is disturbing and hilarious. Harry’s screen persona went further into the dark side with the 1928 film, The Chaser, directed by Langdon (in that film, Harry’s man-child could be seen attempting suicide in drag).

Of course, nothing turns out as Harry hopes, but all still ends happily ever after for the Boy. Despite the happy conclusion, Long Pants ranks as one of the most authentically strange comedies of early cinema. In less than a year, Langdon would go several steps further, lose the up-beat ending, and propel his character into a total loser, Charlie Brown-type territory. Consequently, he would lose his too-easily shocked audience as well. Langdon was certainly ahead of his time and lost everything in his battle for individuality. However, the passage of time indicates little Harry won his standout war after all. He remains unique. 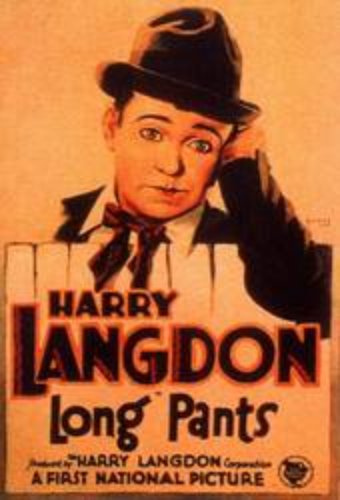