Footlight Parade (1933) benefits greatly from the presence of actors James Cagney and Joan Blondell. Wisely, the film omits the coy indulgences of Busby Berkeley regulars Dick Powell and Ruby Keeler, relegating them to the sidelines and musical numbers. Directed by Lloyd Bacon and choreographed by Berkeley, the film echoes Cagney’s rapid-fire delivery. It is often ranked as Berkeley’s best overall film. 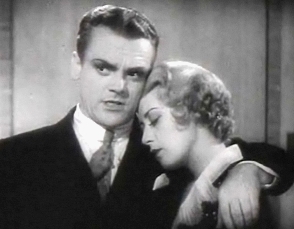 The early 1930s were an era in which musicals and westerns pretty much ruled the roost, as far as quantity goes. As far as quality, with so many being produced, the bulk of Hollywood’s musicals, like their westerns, were wretched. MGM had a bigger reputation for musicals, but their Thirties’ output was predominantly tame fluff, and few have withstood the test of time. The grittier Warner Brothers productions, somewhat predictably, did it better, in no small part due to Busby Berkeley.

This is another “puttin’ on the show” extravaganza. The advent of sound has put an end to silent films in the midst of the Depression. Producer Cagney feels compelled to keep his crew fed and working, so he racks his brain for ideas. He arrives at the concept of “musical prologues” to introduce talkies. Cagney is a Berkeley-like character who has to contend with a scheming ex-wife, a back-stabbing fellow producer (Guy Kibbe), and a planted temptress mole (the quite good Claire Dodd). This cast of characters serve as much needed antagonists for the hyper-intense Cagney to bounce off of. 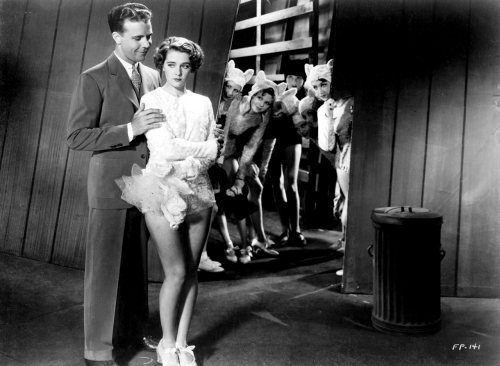 Joan Blondell perfectly parallels Cagney. She is his snappy secretary of substance who secretly loves him. She is no push-over, and, displaying as much energy as her boss, she exposes his crooked partner, saves him from the gold-digging Dodd, and serves as his sounding board. Blondell damn near steals the whole film from Cagney, and that’s no easy feat. Her tough, no-nonsense humor gets the better of Dodd, and she sends her rival packing with a swift kick to the daily duties: “as long as there is a sidewalk, you’ll have a job!” We’re almost as miffed as she is with Cagney for not seeing the obvious. Cagney’s persona was as easily at home in the musical as he was in the gangster melodrama. And, like fellow celluloid gangster George Raft, Cagney was a skilled dancer. We root for Cagney, we root even more for Blondell, and we root for them to connect. This is Hollywood in the 1930s so, rest assured, we will not be disappointed. Keeler and Powell, in secondary roles, are likable and charming. Keeler is the nerd who gets made over by Blondell and emerges as Cagney’s star dancer (her dancing had improved considerably since 42nd Street).

“Sittin’ on the Backyard Fence” is a brief amiable number with Keeler as an amorous kitty and dwarf star Billy Barty as a mischievous rodent. The three real musical numbers come later. The first of these is “Honeymoon Hotel,” which is exactly what it sounds like. It is a naughty romp that celebrates the potential of marital bliss (Keeler and Powell) and slyly pokes fun of the puzzling fact that “no one stops here, unless their name is Smith!” A frilly blonde operator sings, “I hear things I would never dare to tell!” A French maid muses that “the honeymoon suite is never idle.” Stuffy old women in an elevator are scandalized over the obvious amorous enthusiasm of Keeler and Power. A bell hop, who looks remarkably like Matthew Broderick, is a little too anxious to get the honeymooners to their suite. Alas, unannounced relatives show up to douse the heat in Powell’s slacks. The poor man is ready to burst, but as soon as he gets the intrusive kin out the door, a mix-up with a buxom blonde and Billy Barty in the hall serve as stop signs to consummation. This is clearly pre-Hayes code cinema with the winky hanky-panky in overdrive.

“If this doesn’t get them, nothing will” Cagney tells Blondell, and we can only concur when transported to the deliriously outlandish”By the Waterfall.” While most of Berkeley’s work is sexually charged, little of it is actually erotic. This one is. Powell’s dream of love and marriage to Keeler morphs into what many people consider quintessential Berkeley. It is, perhaps, the closest classic Hollywood gets to experimental cinema. A towering waterfall cascades atop a surrealistically gargantuan stage. An aquashow of mermaids dive and swim in and under the water, forming synchronized, geometric patterns. We view them from Berkeley’s breath-taking overhead shots and extreme cheesecake close-ups. This is downright subversive choreography, cinematic insemination. The sequence is long, but never feels it; it never wastes a second.

“Shanghi-Li” descends into radically different territory. Cagney (at the last second, replacing a drunken star) shows off his hoofer skills and still retains his tough guy persona. He stumbles into an opium den, populated with prostrate, scantily clad ladies of ill-repute and bristly addicts, while looking for his Shanghai Lil (Keeler). Inter-racial romance, drugs and liquor are the ingredients topped with a naval send-off.

Footlight Parade has the same knee-jerking pace as films like His Girl Friday (1940), but its the acting of Blondell and Cagney along with the songs of Warren & Dubin and Berkeley’s outstandingly obsessive work that carries it into classic status.