Mozart’s unfinished Zaide is considered a slightly older, less memorable brother to the composer’s Die Entfuhrung aus dem Serail [The Abduction from the Seraglio.]. Zaide is a rescue opera, with a plot based on Voltaire’s “Zaire.” The exiled Christian Gomatz is visited by the Muslim harem slave Zaide, the sultan’s favorite concubine. Zaide falls in love with the enslaved Gomatz, rescues him, and together they flee with the aid of the overseer, Allazim. Zaide chooses spirited freedom over financial security, and invokes the Sultan’s wrath. Zaide and Gomatz are recaptured, imprisoned, and sentenced to death. Awaiting execution in the dungeon, Zaide remains defiant, and the opera abruptly stops with an emotional quartet in which the principals express their anxieties, hopes, and fears. Entfuhrung/Seraglio ended on an optimistic note. Had it been completed, it is doubtful Zaide would have followed suit; Voltaire’s original play ended tragically. Zaide ends with the Sutlan’s decision to kill Zaide and Gomatz. The unhappy ending may have been the reason for Mozart’s eventual abandonment of the project.

For his Salzburg production, Claus Guth’s intertwines Mozart’s neglected, unfinished work with Adama (Earth in Hebrew), by 21st century Israeli composer Chaya Czernowin, commissioned especially for this project. During Mozart’s brief lifetime, he worked with traditional forms and then, especially later in his career, defied those forms. It is one of the great tragedies of music that Mozart did not live another ten to twenty years. His late works (such as the Symphony in G minor ) saw Mozart at his most expansive and innovative. To achieve a true Mozartean spirit, contemporary directors, when interpreting Mozart, should first and foremost forget that this is the work of “THE” Mozart. 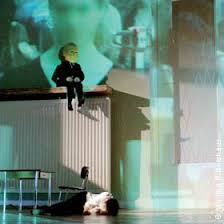 Claus Guth’s Zaide is a profoundly imaginative interpretation that conveys the Mozartean essence in ways that are surprising, provocative, and unforgettable. Guth’s staging of Zaide is one of relentless communication. Guth and Czernowin starkly tap the fleshy context of Zaide. Czernowin’s doomed Romeo and Juliet/Israeli-Palestinian couple in modern day Israel parallel Zaide and Gometz. The contemporary couple, simply named Woman and Man, also contrast Zaide, Gometz, and each other. Woman and Man do not communicate in the normal sense, but through consonants, grunts, and expressions. Yet, through their confused tongues, the two couples represent sharing amidst nightmarish repression.

Contrasting the two sets of couples are a tribe of men representing the status quo, adorned in business suits and over-sized, banal, masked heads. This tribe, who constitute the hordes of the Sultan and the lords of the institutional dungeon, also struggle, immensely, in their attempts at communication, absurdly removing their masks then absurdly placing them back on their heads. Despite their difficulties Zaide, Gometz, Man, and Woman, succeed in communicating. However, the Sultan and his tribe only stumble in their attempts to communicate. Despite their power (and, of course, because of their power) the Sultan and his thugs are impotent. In frustration and desperation they predictably reach for their only recourse: the stones for the stoning.

The sets, designed by Guth’s frequent collaborator, Christian Schmidt, are cast in a crystallized, barren viridian hue. The sets also emphasize contrasts: a normal size school desk is juxtaposed against a giant school desk, and a 4th dimension made up of projected video images enhance the tortured milieu. Mozart’s music rises from the pit (Ivor Bolton conducting The Salzburg Mozarteum Orchestra) while Czernowin’s contrasting atonal music is played on the stage (by Johannes Kalitzke conducting the Austrian Ensemble for New Music). Both conductors and ensembles are inspired, rising to what had to be a considerable challenge. 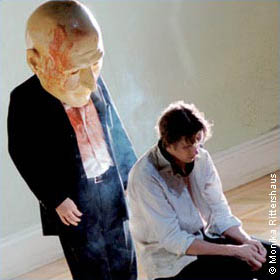 Soprano coloratura Mojca Erdmann is captivating as a down to earth, bitingly angelic Zaide. Topi Lehtipuu’s Gomatz is beguiling, tragically sensitive and yearning. John Mark Ainsley’s Sultan, bloodied and stern, commands nothing less than complete attention as a great wall of rigidity, which Johan Reuter’s Allazim is unable to penetrate. Andreas Fischer repels as The Father (or rather, the symbolic Fatherland) who separates Woman and Man. Noa Frenkel is simply amazing as Woman. She expresses Czernowin’s jarring musical language with ease and perfectly compliments Yaron Windmueller’s equally compelling Man. Their duets together linger vividly in the memory long after the finale, which left this viewer incoherently mumbling to himself as the applause and boos of the evening faded through the speakers.