Busby Berkeley co-directed Dames (1934) with ho-hum stock director Ray Enright, and that may be one reason why it is among the most uneven of Berkeley’s films. The plot is threadbare. Oddball moral majority-type millionaire Hugh Herbert is planning on bequeathing ten million dollars to his cousin Zazu Pitts (of 1924’s infamous Greed) and her husband Guy Kibbee. That is, on one condition–that he finds them to be “morally acceptable” (i.e., no smoking, drinking, or mixing up with show-biz types, especially those that do shows with those immoral dames!) 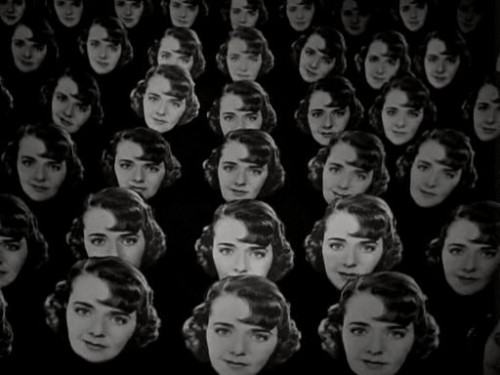 Of course, there has to be a fly in the ointment, and here it is Dick Powell. Powell’s tenor persona wears thin quickly. He is such an all-smiles poster boy that one wonders what in the world that constipated Herbert might have found objectionable in him. A little background info here on Powell: the actor realized the limits of the screen persona that he had been thrust into. He waited out his youth and when he was too old to be prancing on-screen he shrewdly reinvented himself as a hard-boiled forty something private eye in film noir. Here, he is the fellar of Ruby Keeler, daughter of Zazu and Guy. Dick wants to put on a show and gets help from the eternally underrated Joan Blondell (who became Mrs. Powell two years later). 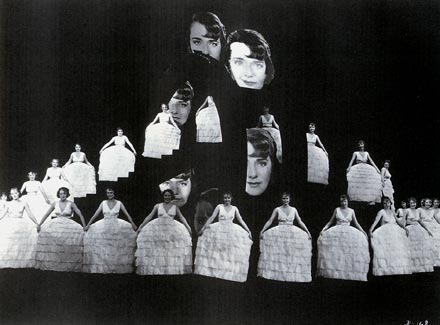 In direct contrast to the virginal Keeler, Blondell is the much more interesting, wise-cracking working girl who manages to get Guy Kibbee into a compromising situation. She uses that to her advantage and blackmails Guy into financing Dick’s Broadway production. Naturally, it will all work out. 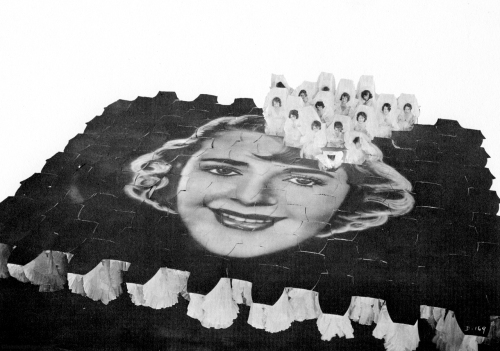 Plot-wise, that’s about all one needs to know. Unfortunately, the film does not spin the plot quite that fast and it takes some time before we get to Berkeley’s numbers, but once we do, most is forgiven. 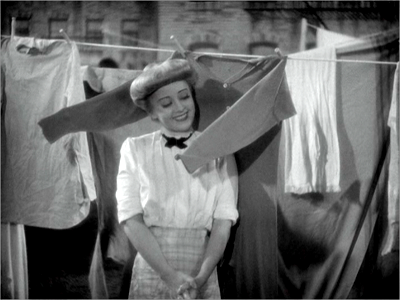 Blondell is Warren and Dubin’s “Girl At The Ironing Board” and, on the surface, the song seems a bit subdued. But, the discerning eye will notice that not only is she singing to the fellas’ shirts on the clothes line, but the shirts are singing back. This number, set at the the turn of the century, is eyelash batting cynicism that only Blondell could have done justice to (with Keeler, the piece would have fallen flat). Blondell is a good sport even when one of the undie shirts gets a sleeve-full of her tush. 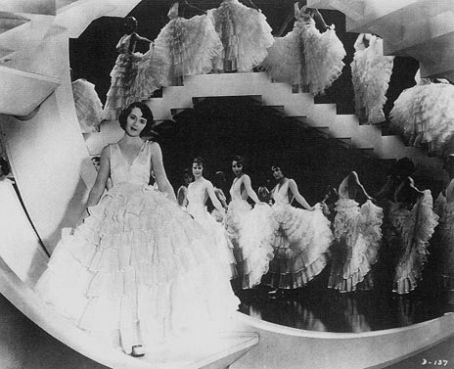 Dick sings “I Only Have Eyes For You” to Ruby and, to prove it, he imagines every girl in the number as a Ruby Keeler clone. She’s the Silver Lear Cigarette Girl. She’s the Willard Hair Gal. And when she is transformed into the Society Cosmetics model she literally morphs into hundreds of decapitated heads floating in a crepuscular abyss. The Ruby Keeler Ferris wheel is adorned with row after row of lily white twirling Ruby divas. Busby’s black marble floor serves as a pond for the Rubys, who are now, literally, water lilies. These form a Kong-size decapitated Ruby head, petrified in a synthetic grin. The real Ruby ascends from the iris of an eye, wearing a dress split all the way up to the mystery of her crotch. The army of Rubys end the high camp number by forming the pattern of a mirror handle. 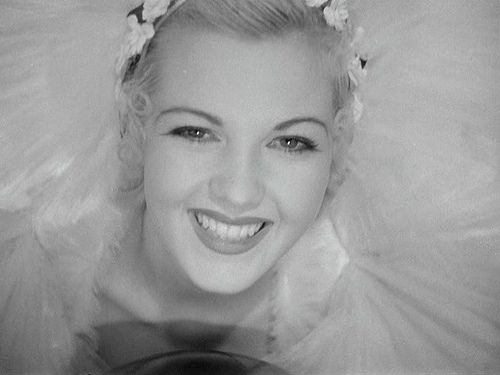 `What Do We Go For? Beautiful Dames!” is among the most blatantly sexist musical numbers ever filmed. Paired dames in negligees rise from their silky beds, stretch, and jump in a tub-full of “Calgon, take me away” bubbly. One shy blonde objects to the camera’s voyeuristic eye and powder puffs the lens. Now it’s make-up time, and of course all long-legged dames apply their foundation while wearing garters. Off to the stage and the girls, now dressed in skin-tight black leotards, spread their legs in unison, a promise in exchange for that gold ring, fellas! But, heaven promises far more than just that and your gal, on a wire, will “float” right up to the door to greet you! (Obviously, the genesis of the Promise Keeper dogma.) Released the year that the Hayes code went into effect, Berkeley (mostly) compensates for increased censorship by barraging the viewer with kaleidoscopic patterns. Berkeley sneaks in some jokes at the expense of suburban values and gets some jabs in through Herbert’s pious, hypocritical character. The Hayes restrictions inspired some “imaginative dodges” on Berkeley’s part, but, compared to his pre-Code films, there is the sense here that his wings are clipped, which may be another reason for the film’s unevenness. 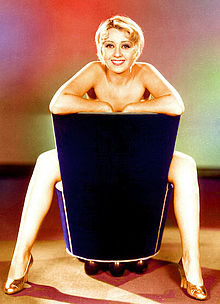 Aptly, Dames concludes with a drunken brawl, which was, alas, all-too familiar territory for Berkeley. The eternal mama’s boy had as a big a weakness for the juice as he did for the dames. A few months after the release of this film, a drunken Berkeley plowed into two vehicles, killing three people. Berkeley was charged with triple murder. Warner Brothers invested in Berkeley’s representation with legal top gun Jerry Geisler. Geisler’s work was cut out for him, but he eventually won an acquittal for Berkeley after two hung juries. The studio execs at Warner’s were impressed enough with the attorney that they would hire him again to (famously) get Errol Flynn acquitted of statutory rape charges. 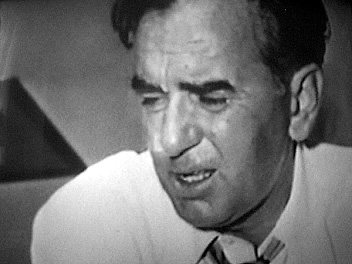 After the death of his mother, Berkeley went through numerous personal and career slumps. He attempted suicide several times, plowed through six marriages, was briefly committed to an institution, had a comeback in the 1960s and died in 1976 at the age of eighty. To this day, Busby Berkeley, the most innovative choreographer in cinema, does not have a star on Hollywood Boulevard. But, who needs reality?

One thought on “A THOUSAND RUBY KEELERS”