DC comic characters (thankfully) never took themselves as seriously as Marvel Comic characters, at least not in the 1970s, when I read them as a lad. Batman later took himself quite seriously and one could argue too much so. Like most people who go to college, I lost interest in the funny books, but I still had a nostalgic affection for the period during which they excited me. Years later, I had to take a nephew to a comic store. It had been years since I even looked at a comic and I was rather surprised. One could always tell when Jack Kirby drew a comic, or Gil Kane, or Frank Robbins. Their style was stamped on everything they did, just like one could always tell whether a Looney Tunes cartoon was drawn by Chuck Jones or Tex Avery.  But, these pulp artists were no more. Individual style in comic book art had been replaced with bland, monochromatic computer drawn art. All the comics looked the same, were dull to look at, and seemed to abound in laughable pseudo-intellect.

One of my favorite comics which I still remember fairly well was Green Lantern/Green Arrow. Green Lantern himself was a bit too Republican self-righteous and bland, kind of like John Boy Walton or, later, Luke Skywalker. GL desperately needed a more colorful, rougher Errol Flynn/Han Solo type and he had it in Green Arrow. 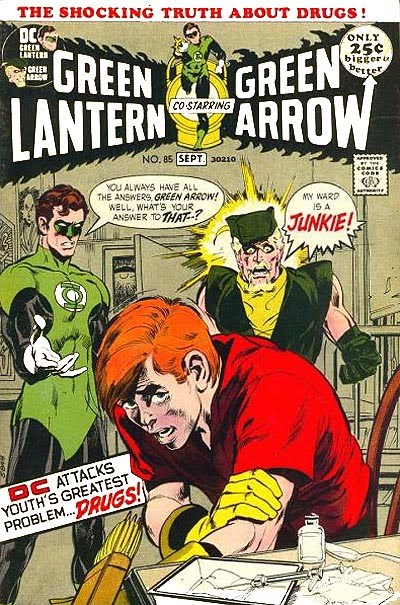 That comic was a bit like Star Trek in that it espoused a pop, liberal message that was  naive and about as subtle as a pair of brass knuckles. But, it was done with personality and style. In the one comic I specifically recall, GL is ready to take some thugs to jail when he sees them picking on some old white guy. GA stops GL and informs him that the old white guy is a slum landlord, robbing and mistreating his tenants.  GL then begins questioning the black and white concept he had of right and wrong. Later, one of the blue guardian guys becomes human and travels with GL and GA in the back of a truck, trekking across American back roads, kind of like superhero Kerouacs, learning lessons in a time of change. The Green Lantern/Green Arrow comic was also a bit surreal in that GL was powered by the color green and felled by the color yellow. Not very realistic, but then attachment to hyper realism in a comic book has to be about one of the most nonsensical fads imaginable. That (probably unintentional) surrealism, combined with a delightfully of its time social message, made Green Lantern/Green Arrow hip.

Later, GL took the silly, overtly complicated sci-fi direction. GL, like Silver Surfer, was more interesting when he was by himself (or with Green Arrow) and earth-bound. Superman took the same unfortunate route. Superman was far more interesting in a crime noir setting than he was fighting intergalactic beings.

Despite, the saturation of comic book movies (and very few good ones), when word of a Green Lantern movie came out, and news that it would be directed by Martin Campbell, it seemed like a surefire bet. After all, Campbell made Zorro fun again (and he didn’t do too badly with 007 either). GL, who has been around for seventy years, would be in good hands. That surefire bet proved to be less so on the opening weekend of Green Lantern (2011).

To be certain, Campbell is hardly infallible (the Zorro sequel), but one has to conclude that Campbell was on cruise control for the making of Green Lantern and that the film was in fact made by a committee of executives.  The film is a 300 million dollar (!) paint-by-number, mishmash of elements ripped from other films, which is rather surprising for a character who, in his comic book heyday, was unique enough to stand apart from his super tight-wearing peers. The dialogue is as if written by a sixteen year old girl on notebook paper and the fx give us a rubbery looking green guy fighting an epic space firework snake thingamajig with a yellow head that utters epitaphs like “I’m gonna suck your soul.” or something akin to that.

While comic characters really are preferable when they don’t take themselves too serious, they still have to have developed personality and this is where Green Lantern flounders. Sure, the character has a desperately needed splash of color in his CG suit (which is less bothersome than the plasticity of the character himself), but this film is like those computer drawn comics, having no identifiable personality. Green Lantern reminds me of later Michael Jackson. Jackson, after the endearing goffiness of “Thriller”, lost his humanity once he became a giant silver Jackson robot.

While Campbell and writers attempted to inject a sense of cocky fun into Hal Jordan, he’s more an adolescent doodle of Tom Cruise in Top Gun (1986) rather than William Shatner’s sweaty, seasoned Captain Kirk. If Reynolds’ is vapid as a valley boy in CG tights (‘I know, right!’), his girlfriend (who I suspect must have written all the script’s cringe-inducing, juvenile dialogue) is worse and the non-entity villain firework snake thingamajig is worse still. Fellow Lanterns (imagine Alan Hale as an eight foot iguana in tight-fitting green pjs) embarrassingly attempt to offer uninspired, scene-chewing comic relief when trying to whip the new “hoser” into Lantern shape. One keeps expecting Jar Jar Binks to show up on Oa. The most potentially interesting characters are Hector Hammond (love that name) and Sinestro who are, unfortunately, wasted, mere half sketches. Indeed, Green Lantern has a choppy feel, as if it’s an unresolved, under developed mix of recycled ideas for a movie. 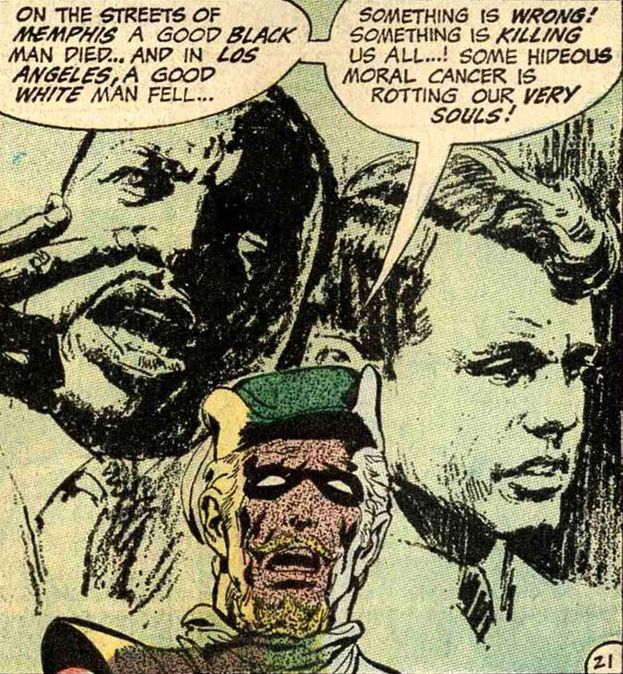 While it’s not as bad as some of the recent crop (Daredevil -2003, Catwoman-2004, Fantastic Four -2005, Ghost Rider-2007, Hulk-2008, Wolverine-2009, Jonah Hex-2010, and Green Hornet-2011) Green Lantern still fails, considering the money invested, the talent involved (Campbell), and the character’s seventy year history. One would think that the committee responsible for this film would have had a test audience or honest feedback to ensure that they had invested into something remarkably worth 300 million dollars. Since they didn’t seem to do that, it is doubtful that this film will break even, let alone generate a sequel, even if the credits reveal a possible sequel involving Sinestro as a Yellow Lantern.